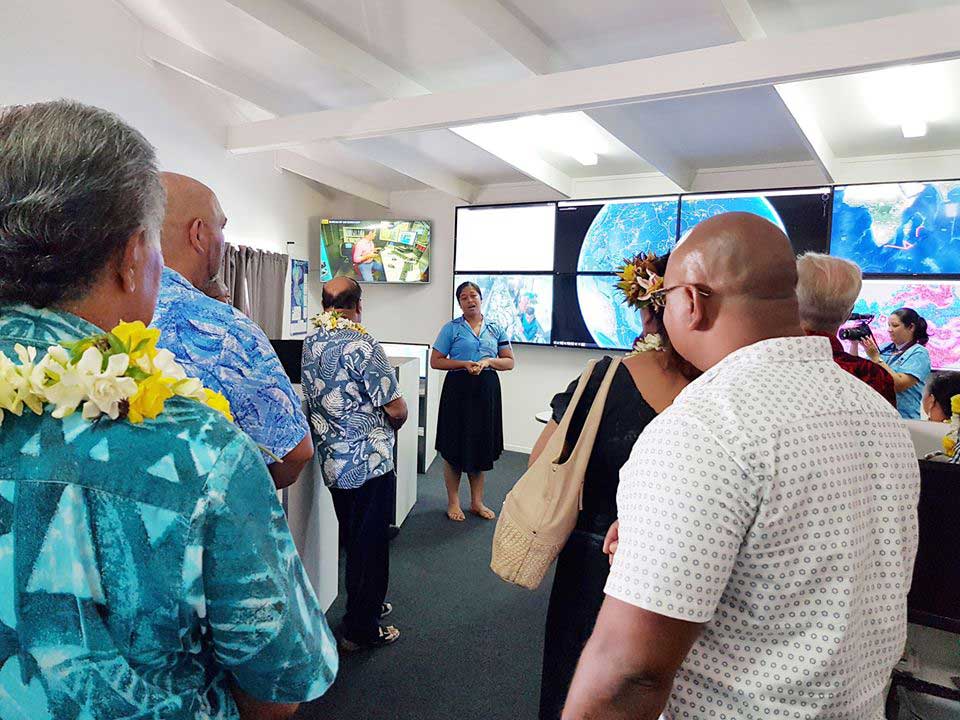 “This facility is a small investment in our sovereign nation’s efforts to take full responsibility over the two million square kilometres of ocean and lagoons which the Cook Islands has jurisdiction over,” said the PM.

“We can be proud in our efforts as a large ocean state to demonstrate leadership in ocean stewardship and ensuring justice and peace in our Moana Nui a Kiva.”

He said Marae Moana legislation has set the bar globally for protection of our ocean and environmental integrity and emphasised the Cook Islands status as one of the first Pacific nations to establish fishing quota to ensure its economic resources are managed sustainably for the future.

He added, “Our Police patrol boat Te Kukupa is the most active in the region, ably assisted by our defence partners and Pacific Island neighbours to ensure maritime security and the peaceful and lawful use of our ocean.”

Puna acknowledged there is still more progress to be made and that the Cook Islands is not complacent to the threats that would seek to undermine its efforts.

The Prime Minister issued a strong warning that the Cook Islands has zero tolerance for illegal activity in its waters. He commended Government officials for their efforts in the recent investigation of Equadorian fishing vessel Nino Maravilla.

Government launched a multi-agency investigation led by the Police Service and assisted by MMR, Customs, Immigration, and the Crown Law Office, with international assistance from New Zealand and Australia after the vessel’s eight crew members sought refuge in Aitutaki on 22 February.

The PM said he was taking the opportunity today to warn those that would wish to commit ocean-based crimes in our waters, that our government will be vigilant to halt any attempt by syndicates to ply illicit trade or undertake non-peaceful activities in our part of the Pacific.

He said the Cook Islands would seek the maximum fines and forfeiture possible under our laws. And where there are gaps in legislation, government would rigorously strengthen these for the safety of our people and our ocean.

“I wish to send the strongest signal of our absolute zero tolerance for those who seek to undermine the mana of our ocean and not to test our resolve.”

Puna said the recent investigation had raised a number of issues around the legitimacy of claims made by the crew as to the boat’s activities and its presence in Cook Island waters.

He noted that Police and Immigration had already successfully prosecuted a Columbian national — who flew into the country shortly after the investigation began — for not declaring his conviction for drug trafficking.

Puna said the Captain and a senior member of the crew have serious convictions for drug trafficking which they hid from our border authorities upon arrival to our shores. The crew members are also being prosecuted by Customs for similar failures around their prior convictions.

The Prime Minister acknowledged Sector Support funding of around $150K toward the extension and renovation of the Oceans Monitoring Centre allocated under the European Union-Cook Islands Sustainable Fisheries Partnership Agreement (SFPA). From July 2017 to January 2018, an existing building, which housed the Offshore Division was extended and renovated by contractors SiteWorX Company Ltd.

The Oceans Monitoring Centre houses 10 staff work spaces and the office of the Offshore Director. It has a large video wall of monitoring screens for the Vessel Monitoring System (VMS) and additional network support equipment to interconnect the Centre to the Main office building.

The PM recognised the efforts of MMR, the Cook Islands Investment Corporation and Ministry of Finance and Economic Management’s Development Coordination Division in the construction of the new Centre.

In his address MMR Secretary Ben Ponia highlighted that the OMC is an investment that the Cook Islands as a sovereign nation must be prepared to undertake to ensure maritime security over our ocean resources and ensuring safe seas. The Oceans Monitoring Centre will enhance MMR’s commitment to its vision of ‘ensuring excellent stewardship of our marine resources’ and support the sustainable management of marine resources across the nation.

The Ministry has developed an effective monitoring, control and surveillance (MCS) programme in the offshore and inshore fisheries sectors.

The Centre allows MMR to:

· Monitor Cook Islands flagged vessels fishing within our waters and to distant water fisheries in areas beyond national jurisdiction.

· Continue to provide a leading role in sub-regional fisheries surveillance and maritime security; and expand its defence partnerships; with a particular focus on its adjacent neighbours and high seas waters

· Improve data collection from artisanal (small-scale) fishing including: more information and understanding on the difference between subsistence and small scale commercial fishing, routine ecological monitoring, and the development of long term data sets which include regular assessment of fishstocks, lagoon water quality, and reef biodiversity and ecosystem health.

Ponia said that the OMC was not an option but an “imperative’’.

“As a sovereign nation the Cook Islands must be prepared to take full responsibility for the maritime security of our ocean economic resource and ensuring our seas are safe.”

“The OMC in its current configuration is a prototype for the future and hopefully it will lay the groundwork for government to invest in a more comprehensive, multi-agency facility,” he added.

The PM thanked the invited guests for attending the official opening ceremony, saying that together the Cook Islands people can protect and maintain the ocean’s integrity as a resource for the future.