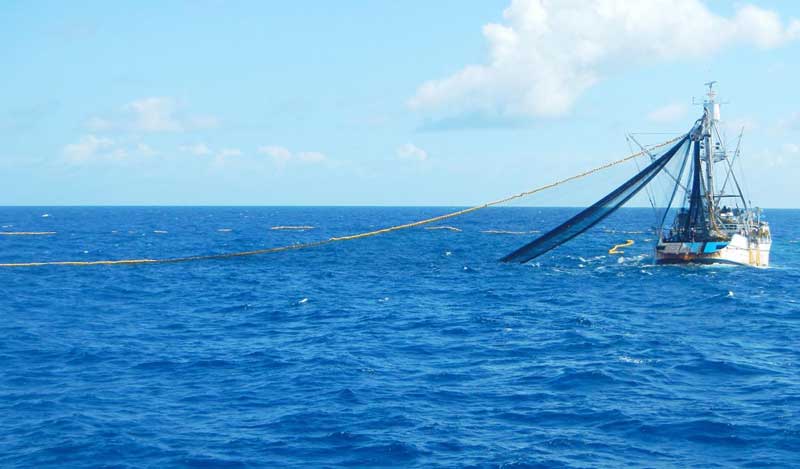 Public interest in the development of the purse seine fishery has grown over the past few years, mainly in relation to the Cook Islands-European Union Sustainable Fisheries Partnership Agreement (SFPA).
Here we take a closer look at the 2017 Cook Islands purse seine catches and recent developments in fisheries management.
The Ministry of Marine Resources’ (MMR) annual fisheries report to the region’s fisheries management organisation, the Western and Central Pacific Fisheries Commission (WCPFC), was prepared ahead of the 14th Regular Session of the Scientific Committee held last month in Busan, South Korea. A more comprehensive annual offshore fisheries report will be published by MMR later this year.
The Cook Islands has reported a record purse seine catch of almost 20,000 metric tonnes (mt) to the Tuna Commission (WCPFC) for 2017.
Of that catch, just 3% was attributed to the two European Union (EU) vessels licensed to fish in Cook Islands’ waters.
The EU vessels caught around 700 metric tonnes (mt) of tuna – 10% of the 7000 mt annual catch limit imposed by the SFPA.
“In the first two years of the SFPA, catches by the EU have been much lower than expected, with very few days actually fished. The US fleet, fishing under bilateral and multilateral agreements, caught 85 per cent of the total foreign-flagged catch last year,” says Director Offshore Tim Costelloe.
“The EU fishing operation in the Cook Islands is part of a wider plan where fishing mainly occurs in the Eastern Pacific Ocean, between Ecuador and American Samoa. The EU fishing effort in Cook Islands’ waters is only a small part of their operation, and seems likely to remain that way for the duration of the agreement.”

“The US has been fishing here for more than three decades under a treaty with the 17 Pacific Island nations of the Forum Fisheries Agency (FFA). The bulk of fishing activity in our waters is pursuant to this treaty, of which we are but a small part. While our fishery has one of the smallest footprints in the region, we continue to employ the best available scientific advice, in line with the conservation and management measures of the Tuna Commission to ensure it is sustainably managed.”
“The region’s purse seine fishery is well-managed as a sustainable tuna fishery across this large multinational stock area,” says Costelloe.
The Cook Islands maintains a reputation in the international fisheries management community as a leader in fisheries management, and is widely respected as one of the highest performing agencies in the Pacific region.
The Ministry has continued to develop the highest standard of Monitoring, Control and Surveillance (MCS) systems over the past five years to allow for complete control over fishing activity in the Cook Islands exclusive economic zone (EEZ).

The Cook Islands purse seine fishery is limited to an annual 1250 ‘fishing’ days (from the region’s pool of 64,000 days) and a catch limit of 30,000 mt of skipjack in any consecutive four quarter period. The SFPA annual catch limit of 7000 mt represents around 156 days (12%) of these fishing days. In 2017, the majority of the 500 days fished were used by the US fleet, with less than 30 days fished by the EU.
In 2016 the US fleet used 134 days of the 350 days available for it to fish in CI waters. The remaining 900 days were available to other purse seiners, of which just 31 days were used.
Last year, 16 purse seiners were licenced and authorised to operate in our waters. Under bilateral agreements, Korea (6 vessels licensed) caught 10%, while Kiribati (7 vessels licensed) caught 2%, and one Tuvalu flagged vessel took less than 1% of total catch.

Skipjack tuna are scooped onboard a purse seine vessel in a brail net.

Skipjack tuna, the target of this fishery, comprised 89% of the 2017 total catch at 17,492 mt, followed by 1716 mt of yellowfin, and 363 mt of bigeye.
The fishery has a strong seasonal trend, with the fourth and first quarter of the year the peak season as opposed to the longline fishery which operates largely through the winter months. A three month FAD closure from July to September prohibits the setting of nets on Fish Aggregating Devices (FADs). Like its next door neighbours, Tuvalu and Tokelau, the Cooks is known as a ‘FAD dependent’ fishery, unlike countries further west which have shallow archipelagic waters providing more opportunity to fish at free schools of skipjack. These countries to the west do, however, allow FAD fishing nine months of the year under the same terms as the Cook Islands, applied by the conservation and management measures (CMMs) of the Tuna Commission.
A bilateral agreement with the Korea-Kiribati fleet to develop free school purse seining in 2015 resulted in a greater proportion of large sized yellowfin tuna caught among the skipjack. Increased fishing pressure on yellowfin could affect supply for local fishers as this species is their mainstay catch and an important source of food security.
The catch of juvenile bigeye remains a concern across the region. The Cook Islands catch of bigeye is one of the lowest. According to a 2016 MMR report, bigeye tuna catches from the purse seine and longline fishery was minimal from 2010-2014 compared to the Pacific total, particularly in the Cook Islands purse seine fishery which accounted for 0.3% of total bigeye catches across the Western and Central Pacific.

A purse seine vessel deploys a net around a school of skipjack – the most abundant tuna species in the Pacific.
MMR’s Oceans Monitoring Centre (OMC) has an advanced capability to monitor and validate the fishing activity of the EU vessels and any vessel fishing in, or adjacent to, the Cook Islands EEZ.
In 2017 MMR and the Organisation of Associated Producers of Large Tuna Freezers (OPAGAC) – a group of eight Spanish tuna vessel-owning companies – set up a pilot project to introduce an electronic monitoring system (EMS). Electronic monitoring officers at the OMC review and analyse video from at least six cameras operating 24 hours a day on board the vessels Aurora B and Rosita C. This pilot programme is designed to be expanded to the entire Cook Islands fleet over the next few years to give fisheries managers complete camera oversight of fishing activity onboard fishing vessels under Cook Islands licence. – ENDS