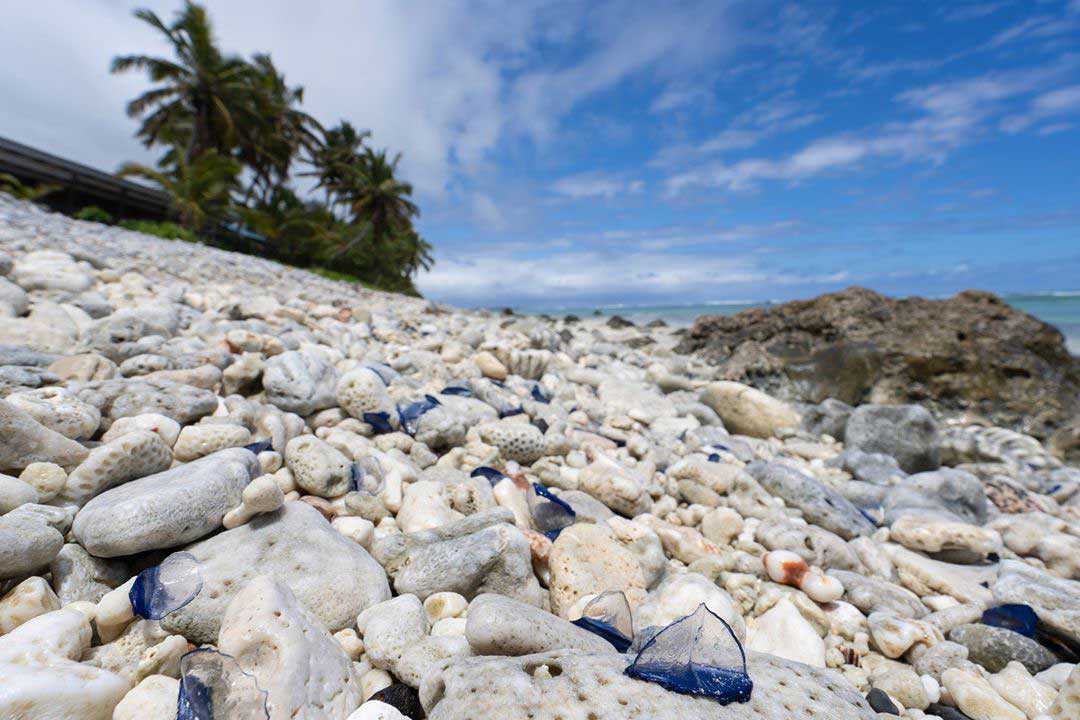 Thousands of small blue jellyfish-like creatures known as “By-the-Wind Sailor” were spotted washed ashore along the beach between the Fishing Club and Club Raro yesterday.

The Ministry of Marine Resources (Tu’anga O Te Pae Moana) received a call from a concerned member of the public about a mass of the blue organisms on the shore, wondering what they were and if they were dangerous. MMR Marine Scientists Kirby Morejohn and James Kora went out to the site to conduct an initial assessment of the organisms, collected some samples and identified them as the species Velella velella, commonly known as by-the-wind sailors.

This free floating creature grows up to around 7cm long and lives on the surface of the open ocean. It uses its sail to catch the wind and propel itself forward. They feed on plankton and the free-swimming larvae of crustaceans and fish. Under certain wind conditions, the animals are vulnerable to being stranded on beaches, as onshore winds can lead them directly towards land. These attributes are what gives it the name ‘by the wind sailor’. The strange-looking creatures often sail the ocean in large groups and because of this, are why some beach strandings number in the thousands.

The public is advised not to worry, as this is a natural occurrence. However, the animal does contain some toxins and although these do not affect humans because they do not sting, it is still recommended by scientists to avoid touching them. When the dead creatures die and dry up on the beach, they will lose their striking blue pigmentation and turn white.
Director of Inshore Fisheries & Aquaculture, Kori Raumea, says MMR wishes to thank the concerned member of the public who brought this interesting find to the attention of the Ministry and hopes this advisory may alleviate some concerns.
“In future, if any member of the public has concerns about the marine environment, please do not hesitate to contact our team to investigate,” he says. — ENDS
PHOTOS BY KIRBY MOREJOHN.